The description of the cooperation among Rosanna Chiessi and Gutai Artist, Shozo Shimamoto and Yasuo Sumi, is obteined from Photo and Video commented fund “Rosanna Chiessi, Archivio fotografico storico artistico Pari& Dispari”. This material has benn donated to Biblioteca Panizzi, Reggio Emilia by Pari&Dispari Archive, consisting of 54 photografic album, collected by Rosanna about her activity and cooperations with the artists.

3 album are dedicated to the cooperation with Gutai movement.

In september 2004 Rosanna Chiessi starts her artistic cooperation with the Japanese artistic movement Gutai, expecially with Shozo Shimamoto, Founder of this movement in 1954 together with Jiro Yashihara and Yasuo Sumi. Rosanna Chiessi tells that Gutai artistic movement was one of hermost important atistic passion, but she had never found the way to keep in contact with the movement artists Japanese, answer to the America and European informal art. Gutai represents the most important and original contribution given by Japanese art to 900 art; it is synonimus of concrete form and its partecipants intend to produce only new and modern works, without excludin any mean. In this way they pass from informal to live exhibitions, capable to astonish and involve emotionally the audience. The favourite substance of Gutai creativity in colour, strained, spread, striked, exploded, mixed as a complex substance, rich of biological allusions nature echoes. The artist’s instruments, objects, tools and their same body are the means to express and impress energy to artistic material, leaving the prints to create their art work. In 10 years Rosanna organizes more than 20 events, and in 2007 founds and becomes chaiwoman till her death in 20016 of Shozo Shimamoto association. In 2004 Rosanna gets in touch with Andrea Mardegan, Shimamoto’s interpreter and assistant and stats a cooperation in order to organize the Exhibition Size at Trevi Museum in May 2005. The most important event was Shimamoto’s performance of colours throwing from an helicopter. In Trevi, Sumi stages a performance with his traditional instruments (japanese clogs, abacus, comb, vibrator, umbrellas). After a few days, Shimamoto’s exhibion Works and Video 1946-2000 takes place at Atelier 25, Reggio Emilia, with prof. Sugyama, Nano art expert. On this occasion, Sumi relizes a performance. In the same days Shimamoto at S. Michele in Giancarlo Guidotti’s house improves his best performance works and burns those unsatisfactory. Three exhibitions take place at her friend Giancarlo Guidotti’s Gallery Spazio fisico in Modena: the first one Gutai and AU in Italy (AU is a centre in Japan, founded by Shimamoto, to which several young artists partecipate, realizing also a magazine. The second one Modena-Osaka, second part in October 2006 and the trird one East wind, master and pupil’s stories from Japan in December 2007. In May 2006 an important event, Shimamoto Un’arma per la pace (a Weapon for peace) takes place in defferent locations in Napoli. In Dante square an amazing performance with colours throwing from a crane on an underlying piano, played by Charlemagne Palestine, a convention at Accademia belle Arti theatre, an exhibition at Palazzo Spagnuolo, an AU Pittura Azione in Umbrella happening by his pupils and a Sumi performance at Vigna di S.Martino. Their association increases more and more during a journey in Japan in April 2007 in order to meet Japanese friends. In June 2007, Shimamoto is already in Italy for a performance at Chiostro S.Nicolo’ in Venice. In the album it is possible to read letters of respect from Sumi to Rosanna.

From 2007 to 2011 Shimamoto promotes intensely his activity in Italy, thanks to Rosanna Chiessi’s work and Shimamoto Association with Beppe Morra and Japanese friends. In 2008, Shimamoto creates spectacular works in different locations,well-known for their cultural and naturalistic beauty. In these years, Shimamoto and the Association increase intensely their production. In May 2008, performances in Napoli at Fondazione Morra, at Punta Campanella Sorrento,with colours throwing from a Saracine tower and at ground level with weddind dressed dancers. At Certosa S.Giacomo and Villa Bersani in Capri,where the artist realizes a 10 for 12 mt work. At Certosa Shimamoto‘s works exhibition. In November at Muse Magi 900 Shimamoto and Sumi exhibition the colours of peace, after their performance. In November 2008 in Genova at Contemporary museum in Villa Croce, the important exhibition, edited by Achille Bonito Oliva, Shozo Shimamoto, samurai acrobata dello sguardo (Shozo Shimamoto, Samurai, acrobat of the eyes), after a performance at Palazzo Ducale and Palazzo Ferretto, coinciding with Lucio Fontana exhibition. In April 2009 Shimamoto Association is present with Shimamoto’s works at Roma, Road to Contemporary art exhibition, edited by Achille Bonito Oliva. In September 2009 in Reggio Emilia La danza dei colori (The colour dance) takes place at GalleryVV8, conciding with Aterballetto performance using wedding-dresses, realized at Punta Campanella. An important event for Gutai movement is the great exhibition in Lugano in 2010, Gutai dipingere il tempo e lo spazio (Gutai, Painting with time and space). Rosanna is present at the exhibition with her 50s and 60s historical works. In February 2011 at the off-area in Bologna Artefiera, takes place an evocative exhibition  A volo Radente (Hedging hop) in S.Stefano Church, presenting Shimamoto’s works, created in 2008 performances. In 2011 in her beloved Capri, Rosanna organizes an exhibition Modarte-Shimamoto at the old fashion maison La parisienne.

Album 54 collects Rosanna Chiessi’s intense activity from September 2011 to January 2015 to promote Gutai movement. The most important event is Shozo Shimamoto’s works 1950-2011 East and West at Palazzo Magnani in Reggio Emilia, from September 23rd to january 8th,  edited by Achille Bonito Oliva with Shozo Shimamoto Association and Fondazione Morra. Palazzo Magnani Staff produces a bilingual catalogue (Allemandi &C) about the complete master ‘s work. The exhibition presents 80 works, showing the main different steps in Shimamoto’s work. Several events take place: performance with broom and yellow tonalities, remake of a 1956 happening, spectacular performance of throws from a crane in front of Palazzo Magnani, conferences with pupils and the public, a recognition to sensei for human rewards. In the same period, in november an exhibition of other Gutai artists Yasuo Sumi and Yozo Ukita Gutai Small giants takes place at VV8 Gallery in R.E. Shozo Shimamoto dies on January 25th 2013, causin great sorrow among all his friends and the art world. His family near Osaka organizes a memorial event starting with a simulation of the famous master colours throwing. Unfortunately Rosanna can’t partecipate and at her place, her daughter Laura flies to Japan with Peppe Morra and other friends, representing the association. The next exhibition at Studio Giangaleazzo Visconti in Milano in September 2013 will be Shozo Shimamoto Memorial Exhibition. Rosanna partecipates to the exhibition with several historica 50s and 60s works. The exhibition in Berlin Gutai-Scream of matter at WEGALLERY ,November 2014-january 20015 keeps on the knowledge and promotion of Shimamoto and Sumi at european level. 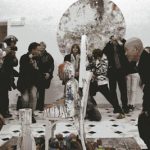 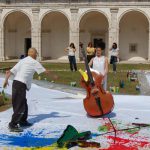 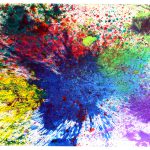 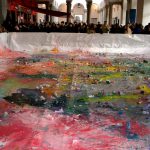 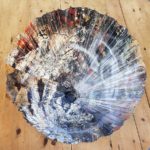 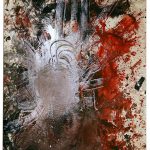 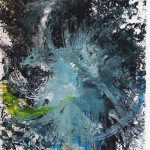 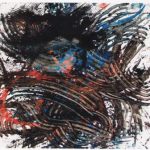